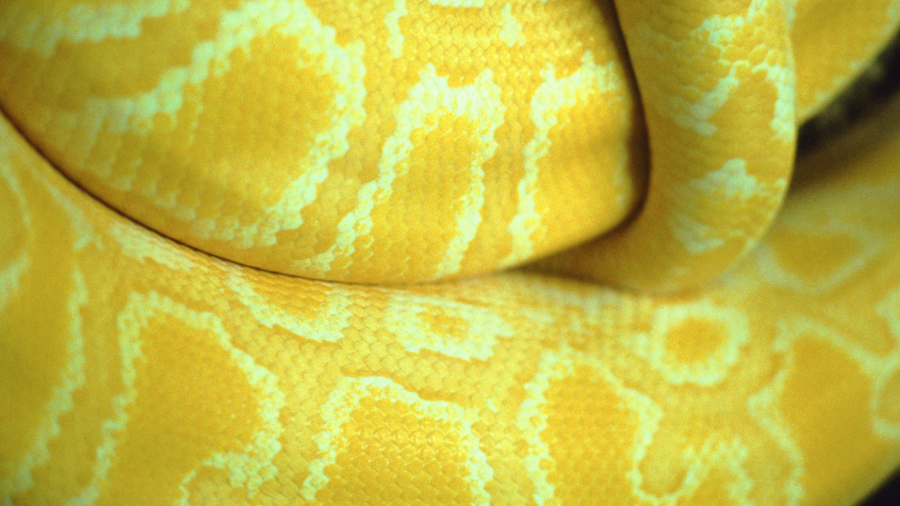 I.
We pull the bull snake from netting. It twists/
like arms that twist beneath the fingertips/
of powerful people; adults and kids/
with unrequited violence on their lips.//
The snake resists its rescue, worry makes/
its way along the scales, wounds dry and days/
old wrung into the skin between the scales/
that line the belly. Hold below the face,//
behind the jaw, the body writhes, but will/
not bite you. Here, behind the eyes are pits/
which recognize all shades of heat. I lift/
the snake and all its jewelry, dangling still//
because the snake would not release itself./
The netting cuts; his muscle swells and swells.//

II.
My mattress sleeps uncomfortable, my back
completely misaligned each night. I sleep
by slithering between my sheets which lack
the dirt and rocks that I grew up in, weeds
which grew through me like apple seeds come up
from nothing, grow up sweet like flesh could—
delicious, made for tongues, for teeth to rub
their bones against and feel enlightened. Blood
is like an apple’s flesh, you masticate
until you understand from where it comes.
Today, I re-articulate a snake
with floral wire, green and small enough
to float between the spine’s foramen. Skull,
I glue, leave off the too many ribs, smile.

III.
On the outside A/C unit a small
unruly fire’s broken out and burned
its mechanisms, burned the mouse, the snake
behind it in its flame. Who more relieved,

the mouse who starved the snake or us? The small
of mouse who scampers just a jaw’s width, burned
before a worse death swallows him? The snake
a wick which could have swallowed? Us, relieved

the fire didn’t crumble into small
piles of dust the hospital, hadn’t burned
within it all the beasts, wild once like snakes,
whose wild is manufactured now? Relieved

is not the word. The small fire burned out.
The snake was not relieved, nor us, nor mouse.

Clara Bush Vadala is a veterinarian and poet residing in Celina, Texas whose work has appeared or is forthcoming in Entropy, Thimble Literary Magazine, and 3Elements Review. Her first book of poems, Prairie Smoke, is available from Finishing Line Press and her second, Beast Invites Me In, is forthcoming from FLP in 2020.

One thought on “Serpentarium by Clara Bush Valada”