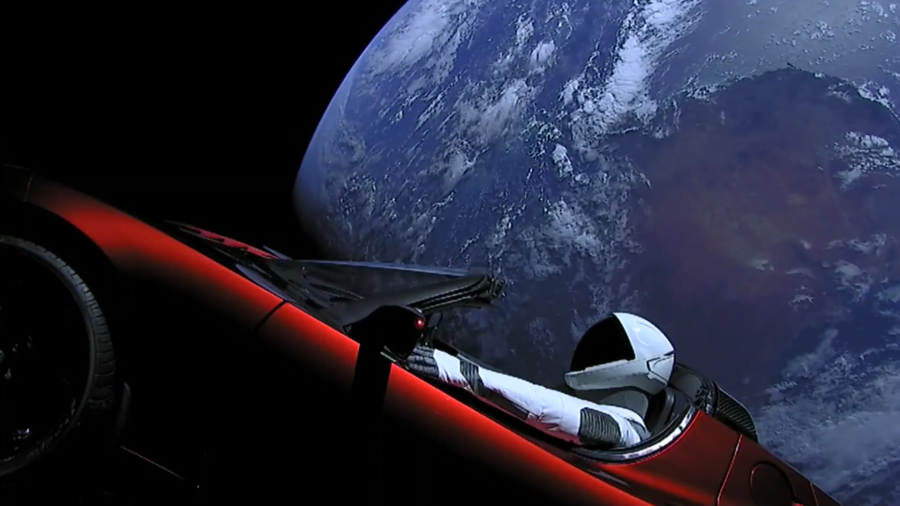 I was eating cereal when Elon Musk launched a car into space. The milk was going bad soon, three days past expiration, so I shoveled spoonfuls of lucky charms and sweet and vaguely curdled liquid into my open mouth. On the television across from the redwood table, I watched the event being discussed by a grinning anchor and a gray-haired scientist who did not look like my father but could have been.

My mother and I lived in the woods below San Francisco when this aeronautical miracle happened. The television cut to Him, the man who put the car in space who looked a little more like my father but could not have been, I told myself. His face was square, lips thin and pursed, and he said,

I’m just trying to think about the future and not be sad.

The cereal slid off my spoon and onto the redwood table. The table was my great grandfather’s, who’d lived in the tail end of the Old West, who’d been one of California’s first park rangers, who’d helped build the now-historic county store. Redwood was the only kind of wood that didn’t get eaten by termites, my mother said. Sometimes I counted the rings, the looping pattern that expanded beneath he finish, trying to see how old the trees were here, how ancient the land was.

Later that day my mother came home after sitting in her office way up on Nob Hill, the highest hill I’d ever been on. From her office you can see the businessmen scurrying around clutching briefcases, the tourists clamoring on the cable cars, the junkies and their dogs laughing, young men who just got hired at Google smoking legal weed in the park. Once, I went to her office, and that was what I saw. But my mother told me most of the time it was foggy, and she never saw anything but the tops of skyscrapers, pointed and flat, and sometimes the glisten of the Bay far away. I had just gotten lucky that day I visited.

She put her coat on the coat rack and saw I’d left the cereal spilled on the table. She asked me how I could treat an old thing with such disrespect, and my teeth, ridden with sugar, ached.

Then she talked about her day at work, and all I could think of was ancient redwoods.

I thought of men in overalls hauling lumber, laying down railroad tracks, rust and gold dust, earthquakes and bank robberies, ruins of a burned down bathhouse on the unforgiving coast, Janis Joplin and Grateful Dead and skinny houses that go farther back than you think. And then hills and valleys of silicon, buildings with every wall and floor and ceiling made of clear glass. The house I lived in, the house Elon Musk lived in, the hands that built them, and how different were they than the hands that built the redwood table?

As I fell asleep that night, I saw the high-pixelated image burned into my skull, the sleek spaceship of a cherry-red vehicle rotating around the planet, floating in perfect suspense. Space was a vacuum, they said. I wondered if I cut open the earth’s core, could I count the rings? If I didn’t think any more about the way the land had changed, about the way the people had changed, would I be happy? Change was progress, they said. That was why the rest of our family had moved away so they could afford braces, that was why they stopped building houses out of redwood. But none of that mattered – the future was here.

Kaylie Saidin grew up in the San Francisco Bay Area and now lives in New Orleans. She is an assistant fiction editor at Pithead Chapel. Her work has won the 2018 Dawson Gaillard Award for Fiction and has been nominated for the Best of the Net Anthology. You can read more of her in Atlas and Alice, Jellyfish Review, Every Pigeon, and others at http://www.kayliesaidin.weebly.com.

One thought on “The Redwood Table by Kaylie Saidin”